ABIDJAN, Ivory Coast, Sept. 28 — It was his infant son’s cries, gasping and insistent, that first woke Salif Oudrawogol one night last month. The smell hit him moments later, wafting into the family’s hut, a noxious mélange reminiscent of rotten eggs, garlic and petroleum. 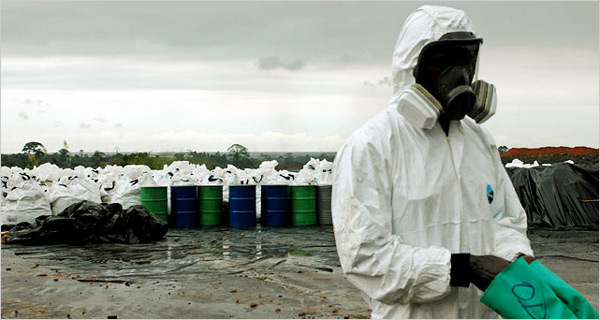 A worker helping to clean up toxic sludge last week in Abidjan, Ivory Coast. The sludge, dumped from a tanker, has been blamed for eight deaths.

A Dark Tale of Globalization 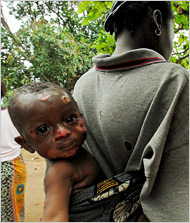 Six-month-old Salam Oudrawogol of Abidjan, Ivory Coast, has been covered with sores since he was exposed to toxic waste in August. More Photos »

Mr. Oudrawogol went outside to investigate. Beside the family’s compound, near his manioc and corn fields, he saw a stinking slick of black sludge.

“The smell was so bad we were afraid,” Mr. Oudrawogol said. “It burned our noses and eyes.”

Over the next few days, the skin of his 6-month-old son, Salam, bloomed with blisters, which burst into weeping sores all over his body. The whole family suffered headaches, nosebleeds and stomach aches.

How that slick, a highly toxic cocktail of petrochemical waste and caustic soda, ended up in Mr. Oudrawogol’s backyard in a suburb north of Abidjan is a dark tale of globalization. It came from a Greek-owned tanker flying a Panamanian flag and leased by the London branch of a Swiss trading corporation whose fiscal headquarters are in the Netherlands. Safe disposal in Europe would have cost about $300,000, or perhaps twice that, counting the cost of delays. But because of decisions and actions made not only here but also in Europe, it was dumped on the doorstep of some of the world’s poorest people.

So far eight people have died, dozens have been hospitalized and 85,000 have sought medical attention, paralyzing the fragile health care system in a country divided and impoverished by civil war, and the crisis has forced a government shakeup.

“In 30 years of doing this kind of work I have never seen anything like this,” said Jean-Loup Quéru, an engineer with a French cleanup company brought in by the Ivorian government to remove the waste. “This kind of industrial waste, dumped in this urban setting, in the middle of the city, never.”

The tale of the sludge can be traced to July 2, when a rust-streaked tanker, the Probo Koala, arrived in Amsterdam after a lengthy stay in the Mediterranean. Leased by Trafigura, a global oil and metals trading company, it was pausing on its way to Estonia to unload what the company said was 250 tons of “marslops” or “regular slops.” That is the wash water from cleaning a ship’s holds, which would normally be laced with oil, gasoline, caustic soda or other chemicals.

Amsterdam Port Services, a waste processing company, took the job, for about $15,000. But as workers unloaded the waste, they found problems, the company said. For one, the volume was much higher, more like 400 tons. For another, the seeping fumes of the waste sickened some of the Dutch workers.

“It was pitch black and had a heavy stench,” said Luut Planting, a spokesman for Amsterdam Port Services. “No one had ever seen similar waste.”

The company stopped unloading the sludge, ordered analyses and then informed the Amsterdam city authorities of the presence of hazardous waste, Mr. Planting said. The material and test results are currently under seal in the office of the Dutch public prosecutor, which has opened a criminal investigation.

A statement posted on Trafigura’s Web site says that tests performed on material discharged by the Probo Koala in Abidjan by a laboratory in Rotterdam showed that the material was not toxic. “Contrary to speculation in the media and the activist communities about residue washings in a recent shipment to Côte d’Ivoire, tests conducted by the company and others show the washings themselves to have little or no toxicity,” the statement says.

As to the deaths and illness, the statement says, “It is still unclear exactly what caused the tragedy.”

But the Rotterdam laboratory, Saybolt, has told Dutch news media that it was asked only for a limited analysis and that the samples were not sealed, not properly marked and not wholly reliable.

Lucas Reijnders, a chemist and professor of environmental science at the University of Amsterdam, said he had seen the results of an analysis done in Ivory Coast by a lab there, Ciapol, on samples taken from the Probo Koala before the dumping.

The analysis showed extremely high levels of caustic soda; mercaptans, a kind of sulfur compound; and hydrogen sulfide, he said. The last, he said, is a volatile compound that “smells of rotten eggs, but at high concentrations you can no longer smell it because it paralyzes your nervous system.”

“It’s very lethal and acts very rapidly,” he added. The mix, he said, was suggestive of oil refining.

Exactly where the waste originated remains unclear. A spokesman for Trafigura, Jan Maat, said the Probo Koala had served in the Mediterranean “as a floating storage tank” and had taken on loads from several different ships, but he declined to give details.

Reports in the Dutch press said the Probo Koala had been secretly used as a floating refinery during the summer, when selling gasoline had become unusually profitable.

Mr. Maat denied that. “This is absolutely untrue,” he said.