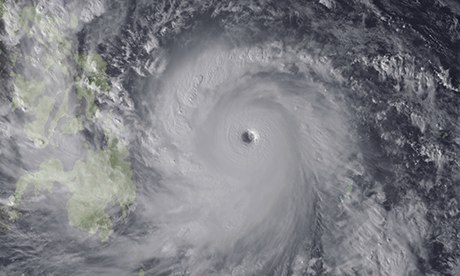 Typhoon Haiyan may have been the strongest storm ever recorded; a fact that has triggered an array of stories discussing its possible links to climate change.

Climate scientists are confident in three ways that climate change will make the impacts of hurricanes worse. First, global warming causes sea level rise, which amplifies storm surges and flooding associated with hurricanes. As a paper published in the Proceedings of the National Academy of Sciences by Aslak Grinsted and colleagues concluded,

“we have probably crossed the threshold where Katrina magnitude hurricane surges are more likely caused by global warming than not.”

Second, as climate scientist Kevin Trenberth has noted, global warming has also increased the amount of moisture in the air, causing more rainfall and amplifying flooding during hurricanes.

Third, warmer oceans are fuel for hurricanes. Research has shown that the strongest hurricanes have grown stronger in most ocean basins around the world over the past several decades, and climate models consistently project that this trend will continue. Chris Mooney recently documented the past decade’s worth of monster hurricanes around the world, and Jeff Masters estimates that 6 of the 13 strongest tropical cyclones on record at landfall have happened since 1998. 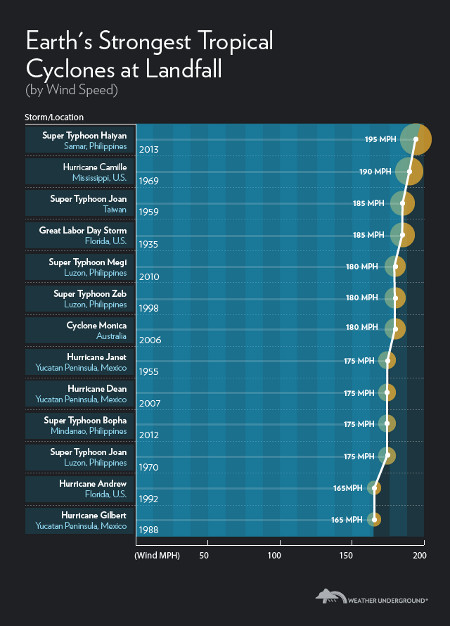 The 13 strongest tropical cyclones at landfall. 6 have happened since 1998. Source: wunderground.com

What about Typhoon Intensity Near the Philippines?

The hurricane intensity trend in the western North Pacific (where the Philippines are located) isn’t crystal clear. One recent paper finds that over the past few decades their intensity has slightly fallen (but has grown for the planet as a whole), while others suggest it’s slightly risen, or that there are fewer but stronger hurricanes in that western North Pacific region.

However, a paper published earlier this year in the Proceedings of the National Academy of Sciences by MIT hurricane expert Kerry Emanuel found that future “Increases in tropical cyclone activity are most prominent in the western North Pacific.” So while we’re not certain about the trend over the past few decades, the evidence indicates that hurricanes near the Philippines will both become stronger and form more frequently in a warmer world.

The frequency of hurricane formation overall is another story. To this point the evidence does not indicate that hurricanes are forming or making landfall more often than in the past, nor are climate scientists confident how global hurricane frequency will change. Thus it’s not a surprise that climate contrarians have focused on hurricane frequency while ignoring hurricane intensity. This is a clear sign of bias by writers like the Mail on Sunday’s David Rose, who even went as far as to once again repeat the myth of a global warming ‘pause’ (a myth that was comprehensively debunked by a new study last week).

Similarly, in a piece published in The Guardian Political Science section, Roger Pielke Jr. criticized President Obama, climate scientist Michael Mann, and others for linking extreme weather to climate change. Pielke lamented that those he criticized didn’t reference the 2012 IPCC special report on extreme weather (SREX). However, Pielke’s reading of that report was very selective.

The IPCC SREX emphasizes that hurricane data include significant uncertainties. However, it’s important to note that absence of evidence is not the same as evidence of absence. For example the fact that the data aren’t good enough to confidently link rising hurricane intensity to human greenhouse gas emissions so far doesn’t mean there isn’t a link. It means we need better data to make a conclusive determination.

However, the report does note that several types of extreme weather will intensify as climate change continues:

“Heavy rainfalls associated with tropical cyclones are likely to increase with continued warming.”

“There is medium confidence that some regions of the world have experienced more intense and longer droughts … There is medium confidence that droughts will intensify in the 21st century in some seasons and areas … This applies to regions including southern Europe and the Mediterranean region, central Europe, central North America, Central America and Mexico, northeast Brazil, and southern Africa.”

“It is virtually certain that increases in the frequency and magnitude of warm daily temperature extremes and decreases in cold extremes will occur in the 21st century at the global scale. It is very likely that the length, frequency, and/or intensity of warm spells or heat waves will increase over most land areas.”

When considering all the available evidence, most of the comments about climate change and extreme weather criticized by Pielke were on solid scientific footing. It’s important that we face up to not just the changes in extreme weather that we’ve seen so far, but those which are soon to come if we continue on our current path. It’s not so much the climate change we’ve seen so far that we’re worried about; it’s what’s yet to come.

What Do We Do About It?

Some climate contrarians have claimed that climate realists are exploiting the victims of Haiyan by discussing the link between hurricanes and climate change. But it was Yeb Saño, the Philippines’ lead negotiator to this year’s United Nations climate talks who pleaded that we stop procrastinating in addressing climate change.

As Michael Mann noted, we can’t say for sure what impact climate change had on Haiyan because we only have one planet, and we’re running a dangerous experiment with it. But it’s important to ask the right questions when it comes to extreme events like Haiyan. Asking if global warming caused Haiyan is the wrong question.

Human-caused climate change makes the impacts of these storms and many other types of extreme weather worse. It fuels hurricanes such that we’ll see superstorms like Haiyan more frequently in the future. Eventually we’ll have to stop denying that reality and start doing something to address it, or these types of extreme weather events will become the new norm.