A House of Cards

The Galilee Coal House of Cards is beginning to topple. It’s almost palpable….

This week, explosive new information shows that the former Queensland Government rushed ahead with its support for Adani despite its own Treasury Department warning that the Galilee project was unbankable.[1]

And yesterday, despite sustained industry lobbying, UNESCO, the body charged with protecting world heritage sites, announced that the Great Barrier Reef will remain on its watch list – a powerful vote of no confidence in our Government and the coal industry to protect this natural wonder from climate change and fossil fuel expansion.

As major new nails sink into the Galilee coal coffin, it’s ever clearer that it’s time for CommBank to bury Adani’s dodgy project once and for all. Watch and share this community message to CommBank urging them to rule out involvement in Adani’s dodgy disaster… 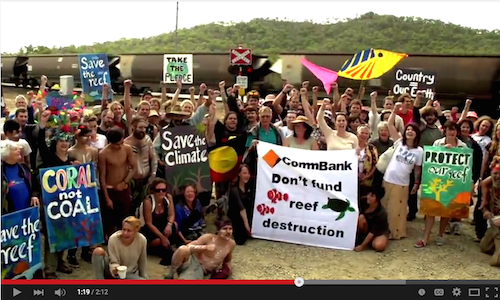 …then help us send this message to CommBank loud and clear by posting this link on their Facebook page.

Without the finance, Adani can’t dig up the Galilee Basin’s coal, they can’t cook the climate and they can’t wreck the Reef. That’s why stopping our Banks from funding this mess is so crucial.

If there’s one word for this project it is a “disaster”. It’s no surprise that a recent report ranked Abbot Point the third most reputationally risky project in the world.  It’s no surprise that millions of people worldwide have taken action to stop it, nor that thousands of customers and hundreds of millions of dollars have been moved out of the banks in protest over it.

And it certainly should come as no surprise that last week, over 100 Australians, led by locals and traditional owners, took action at the gateway to the Galilee – Abbot Point – and pledged to participate in peaceful acts of civil disobedience to stop this carbon bomb from seeing the light of day.*

A mega dodgy mining company, an unstoppable community-led resistance movement, a fragile climate and Reef at stake, and a plummeting coal price – no bank would be stupid enough to touch the Galilee.

Watch and share this video to tell the Commonwealth Banks to say NO to Adani’s reef and climate disaster then join the movement of everyday Australians pledging to take peaceful action to keep Galilee coal in the ground where it belongs.