Carmaker developing three models with Renault for sale in Denmark and Israel, with plans to expand scheme further 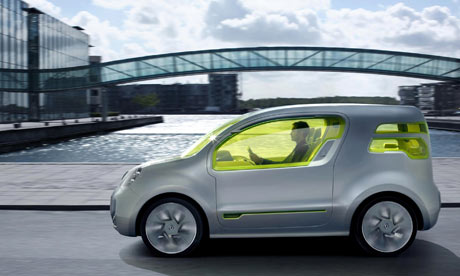 The electric car industry received a boost yesterday after a leading developer of low-emission vehicles said it would produce of tens of thousands vehicles a year from 2011. Better Place, which will run the scheme with Renault, plans to market them initially in Denmark and Israel.


“We expect the production of electric vehicles to be in the tens of thousands per year for the Danish market from 2011,” said Jens Moberg, chief executive of Better Place Denmark, the Danish subsidiary of the transport company developing the lithium batteries fitted in the vehicles.

Electric car drivers will need to sign up for a monthly subscription with Better Place to get access to the batteries. “It will be like signing up for a mobile phone contract,” said Moberg.

He declined to say how much a subscription would cost but said the battery would cost €8,000 (£6,900) to manufacture in 2011-12. “I expect the cost to come down afterwards as production expands,” he said.

Drivers can recharge the batteries at home, which would take several hours, or switch batteries at a “swap station”, taking three to five minutes – less time than it takes to fill a petrol tank.

In Denmark, close to 100 battery swap stations will be available around the country, with plans to expand further.

Drivers will also be able to top up their batteries at charge spots installed at car parks and on the streets. Copenhagen is working to install up to 60 by the time of the UN climate change summit in December, when world leaders will attempt to broker a worldwide deal to reduce carbon emissions.

A number of electric Renault cars will also be available to drive during the conference. Those trying out the cars will not have to worry about parking, as it is already free to park an electric car anywhere in Copenhagen.

Moberg said Better Place was in discussion with a number of European countries, including France, about expanding the scheme further from Israel and Denmark.